Bitcoin (BTC) has started the week on a high after surging past the $58K mark.

The leading cryptocurrency is hovering around the $58,240 price at the time of writing, according to CoinMarketCap.

Crypto analyst Joseph Young has acknowledged that Satoshi Nakamoto will be the richest person globally if Bitcoin hits $181,000.

Satoshi Nakamoto is the pseudonym used by the anonymous person who authored the BTC whitepaper and developed the Bitcoin network. It is speculated that Nakamoto owns nearly 1 million Bitcoins.

Presently, Elon Musk, the CEO of Tesla Motors, and Jeff Bezos, the CEO of Amazon, have been involved in a neck-to-neck battle for the spot of the world’s wealthiest person. Bezos has, however, emerged victorious with a net worth of $181 billion, followed by Musk with $160 billion, according to Bloomberg’s Billionaires Index.

BTC has set its eyes on the $60K level, according to crypto analyst Carl Martin. 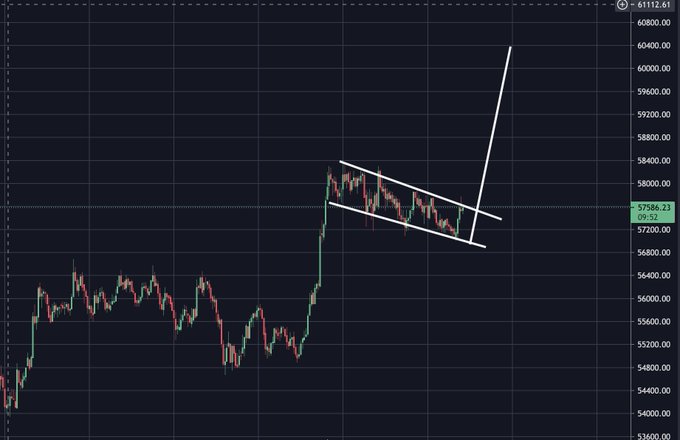 Bitcoin has surged higher based on Visa’s announcement that it will support the USDC stablecoin. The payment giant noted that its network will be made compatible with the USD Coin (USDC). Therefore, the USDC stablecoin will be integrated as a settlement currency for transactions on its network.

With perpetual swaps open interest surging past $15 billion again, time will tell how Bitcoin shapes up going forward because it has been above the $50K mark for 22 days straight.

In other news, the number of BTC retail holders is increasing, spurring bullish sentiment. On-chain cryptocurrency data analytics provider, Glassnode has revealed that the number of addresses holding at least 0.1 Bitcoins just reached an all-time high (ATH) of 3,223,643.

It, therefore, shows that the incessant sell-offs of Bitcoin by the market bears after attaining a price ATH above $60,000 has done little to deter the number of both new and old retail investors taking a position with the cryptocurrency.